We take time here this week to note the current demolition of the Union Steel Products complex north of the Junior High School. It is hard to believe that this was once the site of one of Albion’s major employers which had more than 1,000 persons on the payroll. Even before the company was finally closed in 1995, Union Steel became Albion’s prime example of the aging “rust belt,” along with the closed Brooks Foundry in Sheridan Township. Now both are coming down.

Union Steel was a company where many employees put in 30 and 40 years of their lives, participated in company softball teams, bowling teams, picnics, fishing contests, hunting trips, and traditional company activities. The Union Steel Messenger magazine drew employees together as a family of workers. Their children went to school and grew up with us. Many community volunteers, scout leaders, and civic-minded people worked at USP and were involved in all areas of community service. Their participation in World War II was exceptional, and several USP soldiers gave their lives in service to our county.

Briefly, the Union Steel Screen Company was organized the last day of 1902, and came to Albion in 1905. The name was changed to Union Steel Products in 1915. Union Steel was the world’s largest manufacturer of oven and broiler pan shelves, and made numerous other wire basket related products. President of the firm from 1916 to 1932 was George E. Dean, who was succeeded by his son W. Clark Dean, Albion’s Mayor 1945-1946. During the 1950s and 1960s surnames like Bitney, Transue, Ewbank, Matthews, Davey, Aris, and others were well recognized and respected in town for many years.

There is so much more that could be written about the history of Union Steel however and about life at the plant during its heyday. We will not even begin to attempt that here. After browsing through three decades of Union Steel Messengers this writer decided that perhaps the best thing to do would be to leave our readers with a parting aerial shot from the past, where so many Albionites spent hundreds of hours of their lives and dedicated careers. This photograph was taken by USP photographer Dale Cryderman (later a bishop of the Free Methodist Church) and appeared in the September 1946 issue of the Messenger.

In recent months we have seen the passing of various long-time USP employees, such as Lyle Snell and George Matthews. As time passes, the memories about this once-vibrant Albion employer will gradually diminish. But to future generations we encourage you to read back issues of the Union Steel Messenger in order to ascertain what this company meant to families growing up in Albion, and to what the company (and the Dean family) meant for the city of Albion, and to Albion College. Goodbye, Union Steel. You definitely made your mark in Albion’s history.

Washington Gardner School – From 1872-2011, a school has sat on E. Michigan Avenue as a landmark where thousands of pupils have been educated and

That Cross marker stood there for sixty-one years as one of Albion’s “claim to fame,” until 2020, when it was hit by a vehicle and

This has been a mystery for many years: Who designed the two musical sculpture reliefs on the Band Shell in Victory Park? Morning Star, September

The Old Rugged House Rev. Bennard once quipped, “I’ve been introduced as the author of ‘The Old Gray Mare,’ ‘The Old Oaken Bucket,’ and ‘Rock

“THE OLD RUGGED CROSS” WRITTEN IN ALBION – by Frank Passic

The Old Rugged House In 1912 Rev. Bennard lived in an apartment at the home of Professor Delos Fall (formerly the Andrew Mason Fitch house), 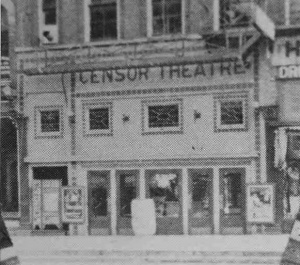 Censor Theatre, Albion, Mich, 1916 The first “talkie” movie that came to Albion was shown at the Censor Theatre in May, 1929; it was a

See much more of Frank’s writings at: Albionmich.com

An Albion native, Frank Passic is a 1971 graduate of Albion High School and has been writing Albion history articles since 1976.  He is the author of several books including Albion in Review, and Growing Up in Albion.

This story is reprinted with permission from Frank Passic.
All text © 2020 Frank Passic. All rights reserved (About Us).

The material on this site may not be reproduced, distributed, transmitted, cached or otherwise used, except with the prior written permission of The Recorder.

See more articles by Frank, and quoting Frank, on this web page: www.albionmich.net/writer-passic

To learn more about how your business can help to support this website, and to get links back to your website, please contact us by clicking here.

Visit Michigan Prints to see art of Albion and other historic locations.

Michigan Prints website offers prints and notecards of Albion, and other places.

Each print has a legend.

“This art of Albion Michigan was created to show a view of Albion from the north end of downtown Albion looking south.

It was created in the early 1980’s and shows several Albion businesses that have moved or changed, and some that are still operating well into the 21st century.

The price of gas shown in the gas station sign is $1.27 per gallon, and the old grain elevator is shown on the far left.”